Rojkind Arquitectos designs a tequila distillery in the Metaverse

As part of an initiative for Tequila José Cuervo, Rojkind Arquitectos presents its new and first metaverse project under the name of “Metadestilería” (Metadistillery) which is based on a design exercise that responds to the function of objects in relation to human needs in specific contexts with the challenge of creating unique experiences through objects and architecture. 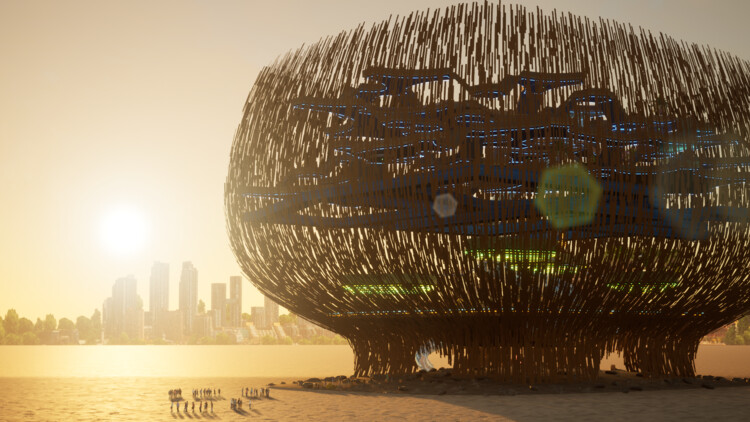 The digital world has penetrated the imagination of millions of young people and has built common environments with intuitive languages ​​of interaction that pose digital challenges, where any subject can acquire an alternative identity through avatars, in a new social context. It is a compression of time and space, where the schedules of each region of the world are diluted and languages ​​are invaded by new digital languages ​​that allow active participation, always in line with the logic of a video game.
– Rojkind Architects

Derived from a 1992 science fiction novel “Snowcrash”, the term “Metaverse” was coined by Neal Stephenson as the successor to the Internet and is Stephenson’s vision of how a digital world might evolve in the near future. . In the world of architecture and design, this new world is beginning to be explored using Internet tools and electronic devices. The metaverse can be understood as a permanent online parallel universe, with environments designed in the third dimension, allowing the coexistence of diverse virtual spaces, and unique objects called Non Fungible Tokens (NFT’s).

Within the laboratory of ideas that Michel Rojkind set up, there was an approach to the metaverse and the production of NFT. The starting point is the questioning of the approach to virtual design from traditional architecture and design methods, accustomed to working in digital environments for the production of high-resolution virtual realities, when the scenarios of the metaverse are only possible in low resolution, but also the questioning of the physical structural characteristics of manufacturing, in order to approach the design with other principles that do not respond to classical physics.

The “Metadestilería” (Metadistillery) project is inspired by the roots of the agave, a plant that generates a feeling of protection and consolidation. In this case, it is meant to be that nucleus where everyone can strengthen ties, thus forming an inclusive community. In each area of ​​the José Cuervo metadistillery, a different activity is programmed to make the experience livelier: at the entrance there is a circle of fire, accompanied by bottles of tequila, a garden of blue agave fields whose the center is bright, a swimming pool where you can play volleyball, a maze of barrels to test your visuospatial skills and a glass filter portal, which finally leads to a bar to improve social interactions.
– Rojkind Architects

Rojkind Arquitectos participated in this project with a group of experts and designers specialized in the digital experience to create the distillery in the metaverse: the Ache agency in the creative development; the expert studio in the Metaverse, Tangible; Decentraland’s largest video game district, Vegas City experience programmers, Mekanism as a marketing agency; and UK-based dining experience experts, Bompass & Parr, responsible for creating the aesthetics and consumer experience in the distillery.